Showing posts from June, 2016
Show All

The Horrible History of Brother K'Bob 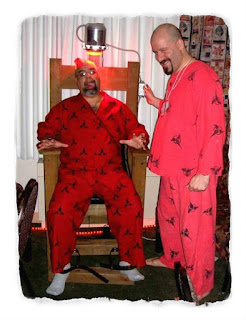 It occurs to me that I have'n't really explained to the readers of Meet the Geeks how I came to have the name Brother K'Bob. Are you interested dear reader? Can you handle the truth?  Strange and terrifying as it may be? I hope you can.   Here we go. It all started in November 1996.  It was the opening weekend for Star Trek: First Contact and I had been invited by a friend (at the time) to go meet up with the  KAG  group that was on hand for the premier. It was at this time that I met the Captain of that ship, Kull of House Jev, later known as Doug, who little did I know would become my nearest and dearest friend and would stand as my best man at my wedding 19 years later. But that is a dark tale for another time. It was the last of the truly interactive premiers that I would attend where the audience was totally immersed in the film.  It was probably also the last of the truly great Star Trek movies (sorry J.J.). After a few meetings and my eventual acceptance
Post a Comment
Read more

A Brief History of the Geeks 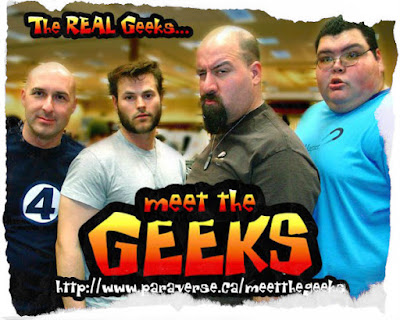 June 28, 2016  Today in Geek History - 1984 - Compaq releases the Compaq Deskpro, a 16-bit desktop computer featuring a 7.14MHz Intel 8086 microprocessor. It is markedly faster than the market-dominatingIBM PC and is capable of running IBM software. Meet the Geeks started off at the Winnipeg Fringe Festival in July of 2002. It was in the beer tent that I was introduced to Clayton Stewart who, at the time, was trying to get a crew together to make a Star Wars fan film. Little did I know how that meeting would change my life. While the film, Star Wars: The Evil Within would ultimately be shelved Clay and I, being of unsound and like minds, came up with an idea for a webcomic where four of the core members of the film would become the story fodder for Meet the Geeks. The premise was simple, four friends, who have fallen on hard financial times, move into a house together. Sitting in a restaurant Clay and I tossed around ideas quickly coming up with a variet
Post a Comment
Read more

Today in Geek History: Filming begins on Star Wars Episode I: The Phantom Menace, the fourth film in the Star Wars saga. The majority of the film will be shot at Leavesden Film Studios in England. Filming will end on September 30. Greetings friends and welcome to the home of Winnipeg's very own Geeks. That's right, here you will find the opinions of Brother K'Bob, Seanorama and Thomas 'The Hammer'. It's a work in progress and I ask that you bear with us as we find our feet after so long an absence from the intrawebz. It's been a long time, but we shall hopefully have some stories that will make it worth your while to stick around. We are, after all, only human. ~Brother K'Bob
Post a Comment
Read more