Showing posts from April, 2018
Show All

By Brother K'Bob - April 09, 2018
Hey Geeks. So... remember that Lobo/Superman playset build I was going to post a Vlog on? The one from the last post? Yeah... about that. Something happened. Sometimes the learning curve is steep, especially when you're learning a program or two and trying to work around a problem. My problem was that the microphone I decided to use was a Sony FV300, which I snagged for free, which is a single channel mike and plays only on the left channel. I decided that I would try to extract the audio from Movie Maker and import the audio into Audacity and use it so that the audio would be played through both the left and right channels. The problem is that Movie Maker saves Audio as an MP4A which Audacity doesn't recognize. After running through several ideas I tried using an online file translator which supposedly would change the file from MP4A to MP3. After running through however I couldn't find the file. I have no idea where it saved it to. I seemed to have more than
Post a Comment
Read more 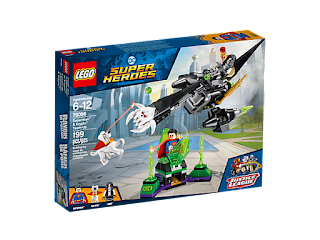 Hey Geeks, CoreyGeek here. Last night I did some experimenting with vlogging and doing a LEGO build video of the very cool Lobo/Superman Justice League playset. My awesome wife (WifeGeek?) had bought me the set a couple of weeks ago when we were in the LEGO store. I may have begged and given her the puppy dog eyes. I honestly never thought I would see an officially licensed Lobo LEGO minifig. Lobo is not what you would call a kid-friendly character.  But then again I also never thought I would see a Rocket Raccoon minifig either.  And why was Krypto the superdog thrown in there? The build was extremely fun and it was educational learning how to do a camera setup for the build. I have some narration to put in and an outro to film. The vlog should be up on the MTG TV Youtube site in the next few days. If I have one complaint, or maybe two, it's that the Lobo figure doesn't have his signature hook and chain and his back patch says "The Main Man"
Post a Comment
Read more

By Brother K'Bob - April 02, 2018
Hey Geeks! There's some changes a-happening around the Geek camp. First off new strips are being worked on. Old strips are being reworked. SeanGeek has joined the Geek Facebook page as an admin and will be assisting around there with posts. We have a YouTube channel which I am still working on. Things are advancing folks. Keep checking back for new content! ~CoreyGeek
Post a Comment
Read more
More posts