Showing posts from November, 2016
Show All

The haunting of Patrick Stewart 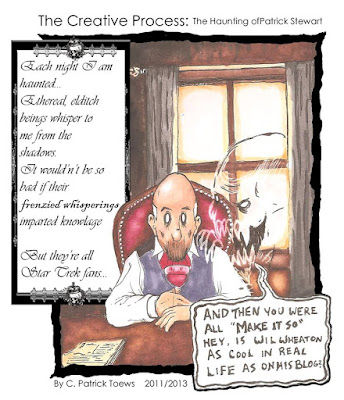 I don't really remember how this strip came to fruition other than it's one of those strange ideas that come to you from time to time. The idea of Patrick Stewart being haunted by Star Trek loving ghosts sounds like an actors nightmare. The original comic was done in pen and ink and then coloured with copic markers. I'm actually quite proud of how this one turned out. I had thought about doing this as a triptych painting but that never came about. ~Brother K'Bob
Post a Comment
Read more

We've already covered the true and terrible saga of Clay meeting his idol David Prowse  so I won't be going too much into it here. Spoiler alert: David Prowse was a total dick. So this comic, as we imagined it, never came to fruition. Clayton and I had hoped that we would meet a jovial and accommodating David Prowse and he would say I'm a pretty, pretty princess which we would videotape and send to Jennie Breeden of the Devils Panties  who would give us mad props and we would hopefully get some traffic on our site out of it. Alas, it was not to be. The Devils Panties strip that started it all was one where Jennie shared her birthday gifts that year. It always makes me laugh. There was a slight screw-up with the comic. In the last panel David Prowse was supposed to be saying "ach" not "ack". I know, he's Scottish, not Bill the cat.  Blame Clay. It's all his fault.  Yeah. That's the ticket.  The guy in the seco
Post a Comment
Read more 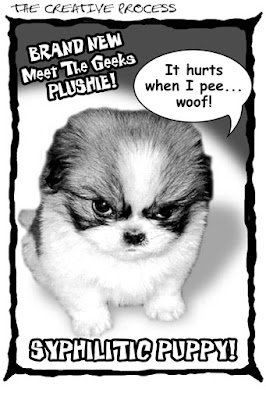 I knew the Syphilitic puppy gag would catch on! I just knew it! Hah!  This was a comic done by Clay and, strangely enough, was a gag by Sean.  See, Sean is the straight man, he's not the gag guy. So one day while in the car we were discussing the syphilitic puppy when Sean, out of no where, quipped "It hurts when I pee.... woof..." Clay and I were left aghast at the fact that Sean had made a funny. It just doesn't happen.  I suppose it wouldn't be hard to find a chinese manufacturer to produce a set of puppy plushies with a voice box that says "it hurts when I pee... woof". It could be done. It could be real merch some day.  Perhaps the Syphilitic puppy will be making a re-appearance.  What do you think geeks? Is there a market for it? Is the time right? Shall I spend my hard earned money, money that could be spent on feeding my children, on a gamble based on a joke in bad taste? That certainly sounds like something I wou
Post a Comment
Read more

Here we continue with the Manitoba Comic Con 2007 strips where we find that our little "prank" had greater consequences on poor matt than suspected. And that Bloodwine is indeed a harsh mistress. The 2007 con was almost perfect for the Geeks to attend because there were guests from each of our fandoms. There was David Finch, whom we'll meet later, David Prowse, whom we've already seen, the Duras sisters (who were absolute dolls) and there was supposed to be a Tolkien scholar who, unfortunately, was unable to make it. The strip was done a long time before we found out that bit of information though. The strip also shows that I was still uncomfortable with hands. Look at that first panel. Yeesh! ~Brother K'Bob
Post a Comment
Read more 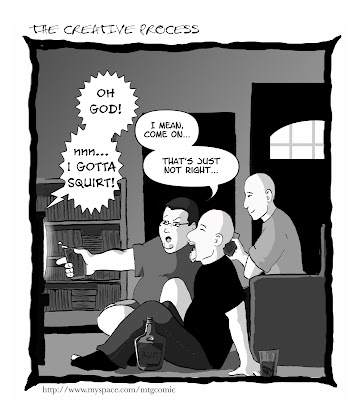 What do you do with a Drunken Klingon?

Oops. Little late getting the Blog up. Today we start getting into the original Comic Con run. At this time we were going to be attending the Manitoba Comic Con and Expo, later known as the Central Canada Comic Con or C4 so we did a series of strips based on imagined shenanigans that we might get up to. In my younger years at various Con's I would usually use my trusty one litre slurpee cup as my drinking vessel. The idea of filling it up with bloodwine, at least as imagined by the Starfleet Marine Corps, would be dangerous. Their recipe, from K'Tesh's recipe's page , and listed below, mixes Tequila and Everclear. Nothing good could come of that. 8 oz Firewater 6 oz Everclear (the full strength stuff) 6 oz triple sec 6 oz white tequila 3 drops green food coloring 6 drops red food coloring It's noted that you might have to adjust the food coloring to get it right. The title of the comic comes from a Klingon take on What do you do With a Drunke
Post a Comment
Read more 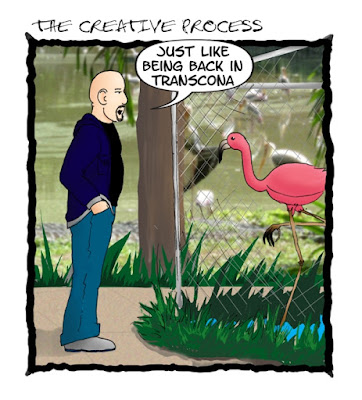 For those of you not in the know, there's a section of Winnipeg viewed with disdain known as Transcona. This is where I grew up and this is where I became the neurotic mess that led me to becoming a cartoonist. Transcona is often mocked by others for being stuck in the past. Whether it's dudes in mullets driving Camaro's to the maligned bar The Oak, Transcona is a suburb unto itself. Transcona was a separate city until 1972, two years before I was born. It was incorporated into the city of Winnipeg Hi Neighbor Sam The Hi Neighbor Sam statue used to sit at the border of Transcona welcoming people into the Town. It's been move a couple of times and repainted and rebranded (it was an advertisement for Canadian Tire for a time). It again sits on Regent welcoming people into the suburb. Now, as for the comic above, why would I be looking at a flamingo and saying "Just like being back in Transcona"? Well, for a time the majority of Transcona homes h
Post a Comment
Read more

Today I'm talking about animation. One of the things I’ve always had an love of is animation. From my early days I’ve watched all sorts, anything I could watch. Of course, like many, my first true loves came from Disney and Warner Brothers. So it shouldn’t be any surprise that as I grew thoughts of becoming an animator entered my mind. I had signed up for an animation course through the National Film Board to be taught at their main street animation studio. Of course, a week before it was to begin, I wound up getting a job as a welder. The course was to be held evenings and the job was an evening shift position. I was devastated. The idea of animation kinda went away for awhile. I had books of course, but life and personal bad habits kept me from affording the materials I would need to begin. Like I couldn’t afford some round doweling and didn’t already own a hole punch. But it had to be perfect don’t you know. There was also the belief that I would fail if I put myse
Post a Comment
Read more