Showing posts from July, 2018
Show All

Back in the Saddle

Yesterday was productive. Yes friends and geeks yesterday good ol' CoreyGeek was kicking ass and taking names. Let me tell you a story. It began with a simple comment to the WifeGeek that I wanted to spend a couple of hours sequestered in my basement studio working on a strip. The plan, or so I hope, is to get new comics going up weekly starting on the seventh of August, returning to putting new strips up on Tuesdays. The WifeGeek agreed on one condition, that I have a new comic up by the end of the day. Well friends, sometimes that's easier said than done but I figured, I can do this. I spent the afternoon working on a revamp of a previously existing strip, updating the artwork and working at my craft. By five I had managed to finish the four panel strip and just needed to come up with another strip by the end of the day. Fortunately I had a plan. Going back to December, the wife bought me a cell phone. She had been playing Pokemon Go since it's release back
Post a Comment
Read more 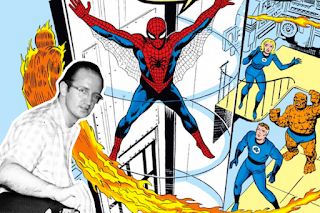 Steve Ditko. Despite his most famous co-creator credit, the creation of Spider-Man, Ditko never really seemed to really get his due. At Marvel, there was Stan Lee, almost single-handedly writing most of their books, and there was Jack Kirby who was drawing most of the titles. Ditko had always been “the other guy”. When I started reading comics, Spider-Man had already gone through Romita Sr, and Andru on the art chores, and Stan Lee wasn’t even writing the book anymore. I was introduced to John Byrne and Chris Claremont’s run on the team-up Spider-Man book called Marvel Team-Up. Sure I had read Spider-Man’s first appearance a bunch of times in various re-prints, but I had largely been unaware of Ditko or his influence. I was aware of Stan Lee and his larger than life writing ability, as it was often talked about reverently by everyone in the industry. Because I had been groomed on John Byrne’s Spider-Man, I was very receptive to John Buscema and John Romita Sr’s version of the hero. An
Post a Comment
Read more

My introduction to the Scumdogs of the Universe and seeing them live. 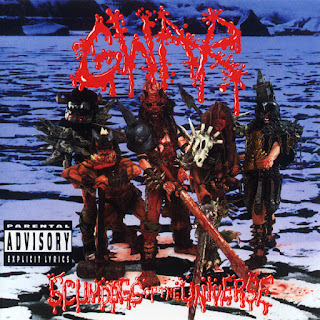 Back in 1990 I came across a band and album that would eventually change my life and outlook on the way that things could be. That band of course was the immortal GWAR and the album was that bands second release: Scumdogs of the Universe.   On the cassette cover stood five grotesque monsters brandishing outrageously oversized and bloodstained weapons. Clad in armor that Warhammer Orcs would find impractical they dominated the cover under the bands name, rendered to look like cartoonish blood. The band stood on what I now know is the bleak, fissured landscape of Antarctica, the location of the bands fictional home (they really hail from Richmond, Virginia) but what, for the longest time, I thought was a sunny beach in front of a lake or sea. Equally bizarre were the creatures names, Oderus Urungus: lead singer. Balsac the Jaws of Death: guitarist. Flattus Maximus: another guitarist. Beefcake the Mighty: Bass. And last but certainly not least was Jizmak the Gusher: Drummer. Mon
Post a Comment
Read more
More posts